In previous post (Photography and Overcoming Phobias) I was telling you about how photography helped me put the fear of spiders under control by taking photos of them. Now I would like to continue to share with you some of my findings about this phobia.

So why do we fear spiders (if we do of course)? There could be some good reasons for this.

First of all spiders look scary. They really look comparing to insects, at least this is how I see them. They have 8 legs, 8 eyes and the way their body is shaped, the overall aspect can be quite scaring for many of us. Maybe this is a form of “stay away from me” defense mechanism, who knows? Of course not only the way they look but also the size matters. As previously mentioned the bigger the spider the greater the fear.

Second, spiders are predators. Yes, unlike many insects (like an innocent beetle, which feeds itself with flower nectar) they eat other beings. Mostly these are insects (flies, bugs and so on) but there are some huge arachnids that can also eat small birds. They can also eat smaller spiders or even spiders of their own kind. In previous post I was talking about sexual dimorphism, which usually means the female is much larger than the male. There’s a good reason for this. After they mate, the female has a good meal consisting of…the spider male. She does this to protect her offsprings, which otherwise might get eaten by the male.

Third, spiders are cruel. Yes, they are. Many of them build a web in order to catch their prey. There are of course exceptions, like the flower spider I was telling you about previously. This web becomes a deadly trap for the unlucky insect or bird that gets stuck into it. The poor being struggles to evade but it does this in vain. Finally the spider shows up and bites it. By doing this it injects a venom that is in fact a neurotoxin that only paralyses the prey. After securing the capture by enveloping it into the web, the spider starts to drain its body from fluids until it becomes dry and empty. Then it waits for the next prey. Quite cruel to be eaten alive, isn’t it? I really wonder if that insect (or bird) is aware of what will happen to it after getting stuck in the web. If yes, imagine the terror it feels right before being eaten.

Last but not least the spiders are venomous. Yes, even humans might suffer from them (this suffering might even mean death in some isolated cases). Of course they are not the only creatures to use venom but if you combine this with the previous reasons…well this might explain the arachnophobia in a way.

So much for the words, I will now let the pictures speak. A picture is worth 1000 words, isn’t it?

Looking forward for your comments.

P.S. Check this too: 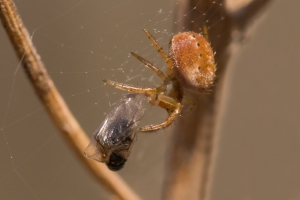