Back to 2019 I can say it was a fruitful year for me from a photographic point of view. On the one hand I learned new stuff like the Ansel Adams Zone System or using the back button for auto-focus (BBAF). On the other hand I had the opportunity to shoot interesting subjects for the first time, some of which I haven’t even seen or heard of before. Most of these are birds and in this post I would like to say a few words about each of these beautiful beings. So let’s get started!

I encountered this beautiful bird for the first time in January during a trip through a mountain village. It was continually snowing and I barely saw anything around me. And all of a sudden I spotted the jay in a tree. I had to be quick, adjusted my settings and took a few shots. Surprisingly the bird didn’t fly. However after a short while I had to hit the road because there was still a long distance to walk and the weather was getting colder. 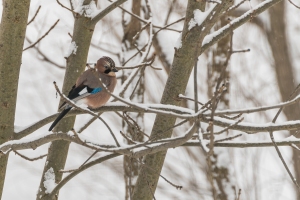 Later during the trip I saw another one, this time a female. 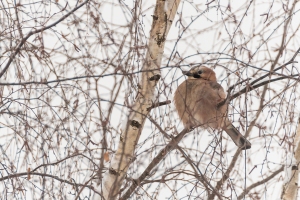 A few months after this excursion I spotted the bird in the parks of Bucharest too. Then I met it again in a mountain village in November when the weather was surprisingly warm. This time I had to chase it throughly as the bird was jumping along a wooden fence in search for worms and insects. Finally the prey was caught!

The jay is an omnivorous bird belonging to the Corvidae family, which means it is related to the crow, raven and magpie. The fact that it is omnivorous is also proven by the below picture which has been taken at the beginning of the current year in Bucharest in the Bordei Park. This time there are no more insects so the magpie enjoys eating a crumb of bread thrown by a visitor. 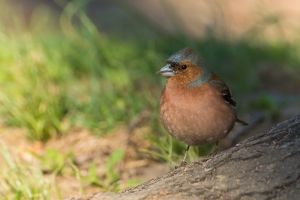 A small but beautiful bird, actually one the most beautiful and colorful I’ve seen so far. I met this tiny fellow on a sunny morning as I was just preparing to leave the Herastrau park (I had to get to work). I said to myself: “I NEED to photograph it! (you know that enthusism when you discover something new and presumably rare!). But it wasn’t easy at all because as like many other small birds it had a high amount of energy and was continually jumping from once place to the other. Finally I managed to capture it on my sensor. Of the few photos taken the above one was the only keeper. Just as I was prepared to take some more a cyclist came by and the bird got scared and flew in the opposite direction (cyclists and runners are usually the “enemies” of good photos in the park, why not admit it? But I also ride the bike so I understand). But this is good enough I said to myself although I was a bit disatisfied at the moment.

I saw this bird for the first time in autumn at Lake Dambovita (Lacul Morii, Bucharest). It is a diving bird and I also noticed it in flight above the water. One day as I was walking near the lake it began to rain so I had to take shelter in a deserted concrete building which was right by the water. This acted as a camouflage so I could take a closer look at the loon, otherwise it keeps a respectable distance for which I would need a longer lens (currently I only have a 70-300mm Tamron). Long story short I got two usable pictures that I’m proudly displaying in this post.

I noticed this bird at Lake Dambovita in spring. It resembles the swallow and I saw an entire flock swarming above the water. It took me many pictures to get this one and I can confirm (again) it is a real challenge to capture small birds in flight with a consumer lens. However it is always worth trying, after all what do we have to lose?

In the last mountain trip (mid November last year) as I was walking throughout a village I noticed a strange bird landing on a wooden fence. I thought to myself: “this is new, I got to immortalize it!” So I put my camera into firing position.

I had to approach the birdie very carefully to make sure it doesn’t fly away as from my experience (and maybe according to one of Murphy’s laws) the less often I see the subject the higher the probability it will run. And this is how it happened here too but fortunately I had enough time to take some good shots before it flew away. The spotted nutcracker is related to the crow too and is sometimes called mountain jay.

This bird is usually a “winter guest” in Romania and indeed I spotted three of them on a cold but sunny December morning at Lake Dambovita. They were quietly swimming in a row along the lake so I had plenty of time to capture them with my camera. One thing to be noted is that tufted ducks are diving birds and use this technique to get the food from under the water.

This is one of the smallest birds I captured last year but also one of the most difficult to shoot. I noticed it for the first time in a weeping willow near Lake Dambovita and actually there were more of them flying from branch to branch and from tree to tree in search for food. It is difficult to shoot it because on the one hand it doesn’t stay in one place for more than a few seconds and on the other hand it likes hovering in trees with dense branches so even if these are leafless it’s not easy at all to get a good framing. So good patience and a longer lens are a requirement! 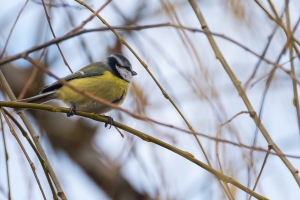 This year is only at the beginning but I already managed to photograph three birds for the first time. The first one is the eurasian wren (Troglodytes troglodytes) which I spotted in a bush in the Bucharest Herastrau Park. The bush was pretty dense so it was difficult to get a good composition. This is one of the smallest birds I have ever seen but also one of the cutest ones. Again, some cyclists and runners spoiled the moment a bit, as when seeing them the bird hid deeper within the branches. Finally it flew away so the below photo is the best I could get. 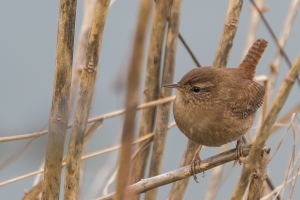 The second bird is the eurasian nuthatch (Sitta Europaea). Unlike the wren I saw it flying from a tree to another, obviously in search for food. It’s a colorful small bird which doesn’t stay much in the same place, making it difficult to take some usable pictures. However it’s fully worth capturing it so I suggest you arm yourself with patience.

The third bird is the great tit (Parus Major). Like the other two, I photographed it in the Herastrau Park. It successfully complements the Eurasian Blue Tit picture taken last year. I can say it was somehow easier to capture the larger bird but anyhow it is still a challenge.

Well, this is it. I hope you enjoyed this post. Feel free to share your experiences in photographing birds no matter if they are in flight, swimming or perched. I’m sure we have much to learn from each other.

P.S. Check these posts too: